It takes less than a minute. If you already have an account login.

Enter your email address and we'll send you a link you can use to pick a new password.

By Tony Smyth in Blog with 0 Comments

You could say that Japan has five seasons. From June 10th or so to mid/late July is the rainy season when, though it is warm, the cloud cover and frequent rain keeps the temperatures in the low twenties. After that, the temperature and soars and the humidity is very hard to take, no matter how long you’ve lived in Japan. It’s a bit like being in a sauna with your clothes on, and nights are only marginal easier to take than daytimes. Many of my friends head off to Europe for August to escape what one of my friends calls, “the blast furnace”.

One of the best things about being Tokyo in summer, other than the delicious fruit, are the free fireworks festivals. The oldest such festival dates back to 1733. Hanabi were originally used to ward off evil spirits.

The biggest festival is the Sumida River festival of late July which regularly gets one million people in attendance. That’s correct, one million!! Trying to get there and back on the one subway line is a nightmare. However, for atmosphere and sheer spectacular display – they release over 20,000 fireworks – it is unsurpassed.

Japanese fireworks are all made by hand, often by companies or families who have been in the business for over a century. Of course, being Japan, there is quite a lot of high technology involved as well, mostly in triggering the sequences and timing of launches. The biggest fireworks are the world record holding Yonshakudama shells, which are 1.2 meter in diameter and weigh several hundred kilograms. More modern touches are shells that burst into shapes such as hearts, smiley faces and cartoon characters, causing the Japanese onlookers to say “Kawaii” – cute! [They are big on cuteness in Japan.]

Many Japanese, especially the young, wear yukata, a light cotton-type kimono printed in vivid colours. As space is at a premium, hotel rooms and balconies overlooking the spectacle are sold out many months in advance. Many shows offer paid seating, but tickets are usually not available on the day and are often difficult to get into without Japanese language skills. Also, turning up 15 minutes before the start of the show and expecting to get a seat is very naive. I was at Tokyo Bay show two hours before the 7.00pm show and still had a hard time finding a good place with a clear view.

At the Tokyo Bay fireworks festival shown in these photos, hundreds of boats and many floating restaurants with paper lanterns along the sides, gather in the area below where the fireworks are held. Between the ‘lit up’ Rainbow Bridge (hence its name), the lights around the bay, and the lights of so many boats, and then the display overhead, it’s a very visual spectacle, all reflected in the placid waters. Just a pity about the humidity, the long lines for trains, and the effort to get a good viewing space. 12,000 fireworks are launched at this festival, not as many as Sumida but the setting is more picturesque.

Unfortunately, the next Tokyo Bay Fireworks Festival won’t be until 2021, as preparation is underway in the same area for the 2020 Olympic Games. 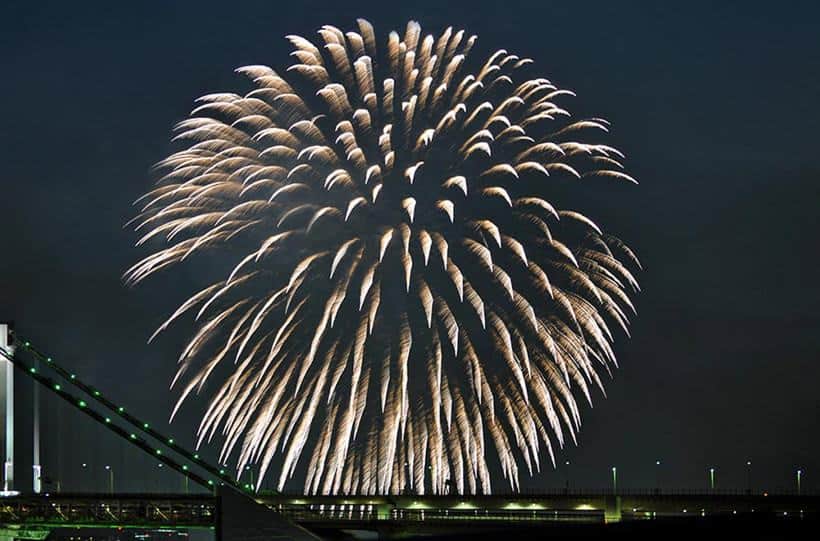 Tony Smyth is Irish and has lived in Japan 30 years. He has two Japan-related websites: tokyotales365.com and the promotion site for this new book fukushimatokyoquake.com. This book is about the coming Tokyo earthquake, nuclear power, global warming and the importance of Japans technologies to the world economy.